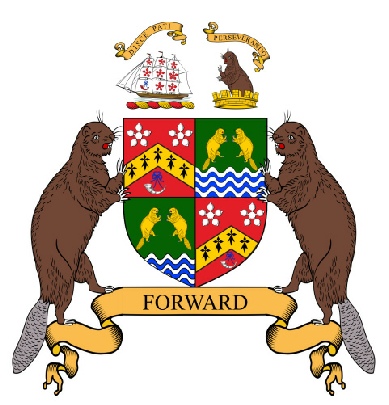 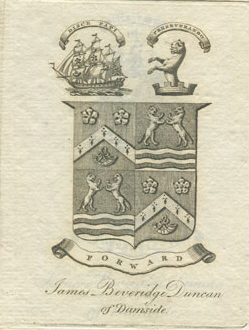 in the County of Perth and of Blackheath in the County of Kent Esquire, Chief of the Surname of Beveridge in Scotland Bears Quarterly first and fourth Gules a chevron erminois betweeen two cinquefoils in chief Argent and a huntinghorn in base of the last, stringed Azure for Duncan second and third Vert two beavers combatant Or, the base wavy Argent and Azure for Beveridge, with two crests that on the dexter side a ship in full sail each charged with a cinquefoil Gules and the fore tack with a hunting horn of the last stringed Azure. Motto above DISCE PATI for Duncan that on the sinister side a demi beaver proper out of a mural crown Or. Motto above PERSEVERANDO for Beveridge. Supporters on a compartment on which is this motto Forward two beavers proper as being Chief of the Surname of Beveridge in Scotland.